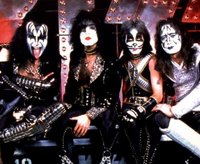 I think I have killed my Earworm. I honestly think I am now free of its wretched grasp. I am not sure how it was done and really do not care how as long as I am free of Kiss and their horrible, nasty, icky, disgraceful, sugar-coated power pop-metal.

I know I have been on a theme of sorts here this weekend, but that is one of the nasty side-effects of an Earworm infection. The more that song repeated in my head, the more I was forced to think about how awful that song was and how good, well better than average they used to be. The 80's seemed to be hard on every band, but the metal bands suffered the most. They were affected by disco, although they never realized it at the time. I Was Made for Loving You is even a disco song by none other than Kiss.

While not the rock-gods they thought themselves to be, Kiss did write some great songs before the Great Music Depression of 1980. They are up there with Cheap Trick and Blue Oyster Cult to me. While never achieving that Zeppelin status, they did write some great anthems for the time. They earned a place in Rock History, but not a starring role.

Rock and Roll All Nite is right up there with Surrender and Godzilla. Strutter and Detroit Rock City are easily on par with Dream Police or Burning for You, but these are not songs that would be representative of quality or classic rock by any standard. They are simply catchy songs with a hook and a chant able chorus. They are geared more for what I like to call the Budweiser Crowd. 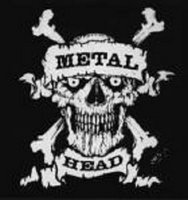 Everyone has seen the Budweiser Crowd. They are found in any place you have a high school and teenagers. The scientific name for them is Genus: Metalheadus Species Poserous. They are mammals from what science can tell. They are always in search of a mate, yet never seem to reproduce. This does not change their population however, so there must be a secret mating spot that science has yet been unable to find. Also, evolution seems to skip them. While Darwin had found that creatures adapt to their surroundings for survival, the Metalheadus Poserous seem to be identical the world around. They are a truly one of the arguments for unintelligent lack-of-design.

For the purposes of this article, Metalheadus Poserous will be referred to by their common name: Posers.

Posers are very easy to spot in the wild. Their natural habitats are usually the same as your average teenager, but their habits and appearance in these places is completely unique. They tend to all dress in faded blue jeans, usually with holes in the knees. A baseball hat is usually found, worn backwards, atop a mullet hair style. Partially grown mustaches can usually be found on the males, but never a full beard. It appears that Posers are incapable of growing true facial hair.

They usually are found in packs of three to five males and, sometimes one or two females. The females of the species appear identical to the males, with the obvious lack of facial hair usually and an abundance of hairspray obscuring if they have a mullet or not. They are very territorial, but usually claim a very small territory. More often than not, it is just a few feet from the back of their pick-up truck adorned with AC/DC and Metallica stickers.

If their territory is threatened, their behavior is always the same, so it is therefore possible to survive an encounter. First, remember they never attack alone. The Poser is a cowardly creature that gains strength only from not wanting to look weak before his peers. If you can outnumber them, the chance of a confrontation drops significantly. If not, distract them with beer, pot, or talk of Metallica. They usually suffer from a chemically enhanced attention deficit so, if you can keep them from attacking for five minutes, you will be fine. Happily, your chances of running into a pack of Posers greatly decreases as you grow.

The Poser is fascinated by simplistic music. The less chords and changes the better. It is weird they attach themselves to a band like Metallica, known for more complex arrangements, but they counter it with the 3 chord heavy blues of AC/DC, the raunch of Guns N'Roses, or the rapping of Linkin Park. Rapping? What the hell is rap doing in rock anyway? Next is disco punk? Hip-hop country? Anyway, it appears any music that is simple or contains the word "f*ck" is big with this species.

It is important to note at this point that not all AC/DC or Metallica fans are Posers. Some appear like Posers, but are actually poser Posers, trying to fit in. Most fans are real fans and should not feel offended as they read this. If you did, hello Poser. Rock on Dude!

There is hope for the Poser. As they age, they usually outgrow most of this behavior. I know. I used to be one.

See what an Earworm can do to you? Please help me eradicate this problem in our lifetime.
Another Pondering by Unknown

Thank goodness that nasty little worm is out of your head. Kiss? My kid used to love them; drove me nuts. LOL. Blue Oyster Cult and Zeppelin -- that's music. I suppose I do have to confess that I get an urge to listen to Guns 'n Roses every once in a blue moon. To my credit, I do lock myself in my room before doing so.

Posers. Grrrr. They ought to be banned from the universe. Serena's just slightly opinionated today.:)

First the debacle over at PWZ and now kanrei is trying to piss me off....KISS is rock royalty....not like that crap the Rolling Stones trots out!

Who Wrote This Crap?

To Reach The Kanrei, Simply Push the Red Button